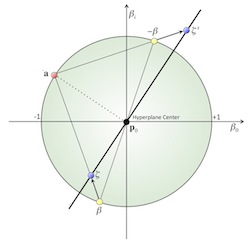 The AVS Lab continues to perform and publish research in the area of spacecraft kinematics, dynamics and control. Even after over a 100 years of research into the kinematic description of a rigid body, new kinematic descriptions continue to be developed. Recently, our group has been studying various aspects of creating new 3-parameter sets using generalized projections of the Euler Parameter (quaternion) unit constraint surface onto a three-dimensional hyperplane. This has led to interesting new classes of attitude coordinates which either generalized earlier available minimal attitude parameter sets such as the Modified Rodrigues Parameters (MRPs) or the Classical Rodrigues Parameters (CRPs).

The Hyper-surface Stereographic Orientation Parameters (HSOPs), illustrated in the figure above, allow the stereographic projection point to be on a general location on the quaternion constraint surface. This allows the prior MRPs and Asymmetric Stereographic Orientation Parameters (ASOPs) to be united into one family. Similarly, the Symmetric Stereographic Orientation Parameters (SSOPs) allow for the projection point to be moved along the scalar quaternion axis. In all these cases interesting minimal attitude parameter sets can be created with custom singular behavior. For example, it is possible to create attitude coordinates which will go singular (values grow infinitely large) if a particular rotation angle is achieved with respect to a reference orientation, regardless about which axis this specific rotation is achieved. Or, coordinates can be create that go singular only if a particular rotation about a specific axis is performed. 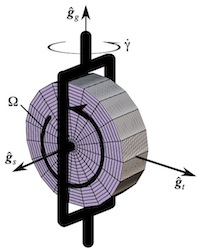 The dynamics and control of spacecraft continues to be of interest. In particular, how to simulate complex spacecraft dynamics in a modern simulation framework such as Basilisk. Recent research has develoved closed form differential equations solutions for a rigid spacecraft hub which has an arbitrary number of actuators attached. These can include imbalanced reaction wheels, imbalanced Variable Speed Control Moment Gyros (VSMCGs), variable mass fuel tanks, linear and rotational fuel slosh models, as well as single- and multi-hinged panels to simulate flexing or deployable solar arrays. 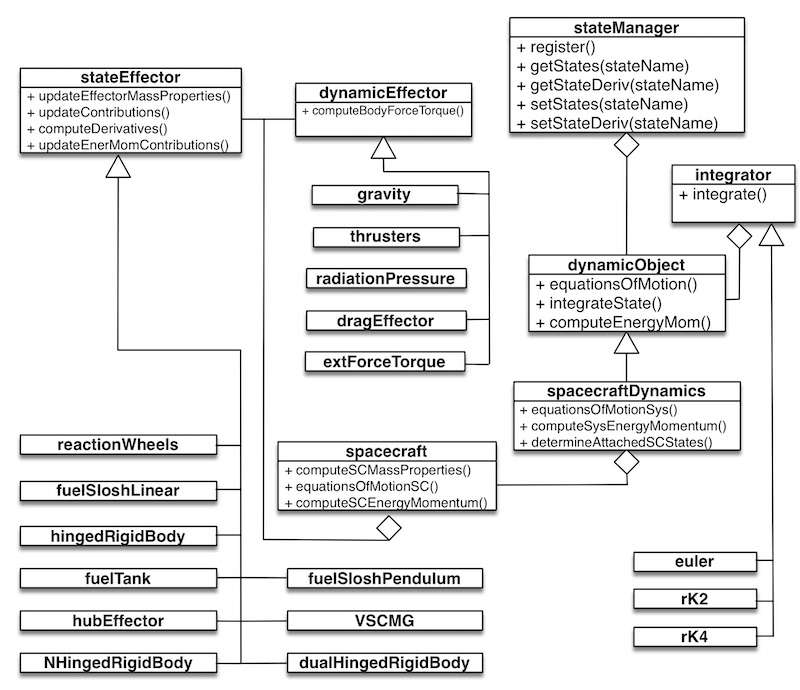 The Basilisk astrodynamics simulation framework is built with a modern programming approach where the spacecraft dynamics can be configured in Python without requiring any auto-code generation. The user specifies a core spacecraft hub component, and the proceeds to attached reaction wheels, thrusters, etc., while also embedding a range of gravitational celestial bodies. The result is a very modular approach to dynamics that does not sacrifice on any fidelity. While the full nonlinear coupling is retained, no code has to be recompiled to consider another spacecraft configuration. Further, the AVS lab developed a back-substitution method where the cross coupling between the spacecraft hub and the actuators is analytical back-solved. This approach provides a modular solution that is very fast to computationally evaluate.

As a result, very complex spacecraft dynamics solutions can be encoded in Basilisk in a modular manner. Consider the challenge of modeling a flexible solar panel through the first-order stiffness at the hinge. Solutions for multi-panel approximations have also been developed. Such flexing is often approximated through one-dimensional motion, or by dropping complex cross-coupling terms. The AVS lab developed in Basilisk a complete solution suitable for general three-dimensional motion of the spacecraft hub. To validate the simulation the angular momentum and energy based checks are baked in to ensure no mechanics are being violated.

Another complex dynamical system is the imbalance reaction wheel or RW device. Here to analytical solutions have been developed that can readily be applied to the modular Basilisk architecture. The state engine automatically accounts for the required number of device states to integrate depending on the imbalance model being applied. 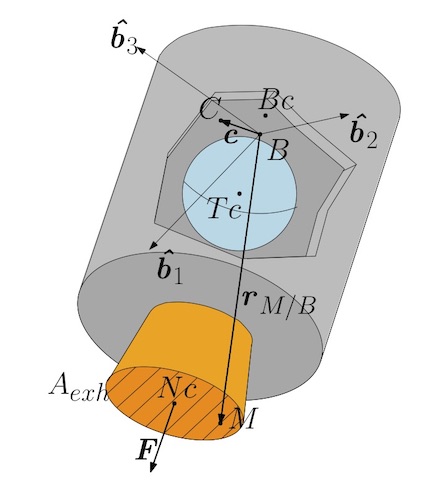 A mass depletion model is developed as well that can account for the momentum departure of fuel mass being depleted. This allows for large thruster firings to be simulated even though the spacecraft might be undergoing a general three-dimensional rotation. This is critical to model the primary thrusters firing when the spacecraft is recovering from a system reboot during an orbit insertion.

There is always more dynamics and control research that the AVS lab is engaged in. The current projects are being developed in a manner that the results can readily be applied to the open-source Basilisk architecture. This allows for the dissertation research to be shared with the astrodynamics community at large, and ensures that the student's research has a larger impact by it being more accessible.