Space debris has become a critical issue for space operations. Every month we hear about a near-miss in space, astronauts in the space station need to take shelter due to space debris concerns, or occasionally reports discussing a collision such as the Iridium-Cosmos collision. Active Debris Removal (ADR) methods have remained elusive due to the engineering, economical and political concerns. However, over the last few years ADR research is on the upswing again, with different international research groups studying ranges of potential solutions. 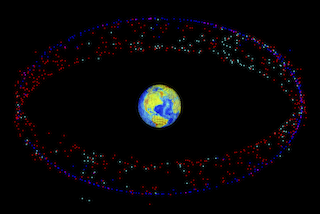 The geostationary (GEO) regime is a precious commodity of the terrestrial satellite industry that has become contaminated with an alarming number of orbital debris objects. Defunct, decommissioned spacecraft, upper launch vehicle stages, and dangerous fragmentation particulates continuously threaten operational satellites residing within this arena. As lack of atmospheric drag effects at the GEO altitude renders lifetimes of these debris objects infinitely long, appropriate conjunction and mitigation assessment must be performed to safeguard functional GEO satellites from colliding with the surrounding debris field. GEO satellites must maintain a specific longitude, and thus cannot simply phase shift to evade debris – an analysis of the macroscopic behavior of the geostationary debris field is therefore needed to describe debris fluxes through GEO longitude bins, to predict how often operational satellites in these zones must potentially perform evasive thrusting. Rather than providing the highly-accurate analysis necessary for conjunction assessment, the AVS Lab is investigating large-scale behavior of the debris field to assess the impact on local GEO debris densities, and determine which regions of the GEO ring are in general most susceptible to rising debris fluxes.

An elegant solution is being investigated to an old problem of how to remove expired or malfunctioning satellites from the geosynchronous belt. Previous space-tug concepts describe a scenario where one craft (the tug) docks with another (debris) and then boosts that object to a super-synchronous orbit. The most challenging aspect of these concepts is the very complex proximity operations to an aging, possibly rotating and, probably, non-cooperative satellite. Instead the Geosynchronous Large Debris Reorbiter (GLiDeR) is being investigated to use active charge emission to raise its own absolute potential to 10's of kilovolts and, in addition, directs a stream of charged particles at the debris to increase its absolute potential. In a puller configuration the opposite polarity of the debris creates an attractive force between the GLiDeR and the debris. Next, fuel-efficient micro-thrusters are employed to gently move the reorbiter relative to the debris, and then accelerate the debris out of its geosynchronous slot and deposit it in a disposal orbit. Preliminary analysis shows that a 1000kg debris object can be re-orbited over 2-4 months. During the reorbit phase the separation distance is held nominally fixed without physical contact, even if the debris is tumbling, by actively controlling the charge transfer between the reorbiter and the debris. 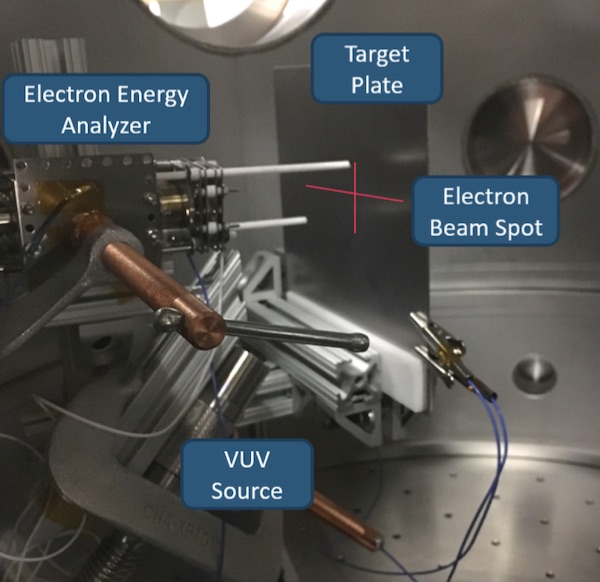 To measure the potential on the space debris, two methods of touchless charge sensing are being investigated. The first method is measuring the secondary electron emission that results when a metal is exposed to an electron flux. This could be from the GLiDeR electron-gun emission, or from the natural space weather environment. The second method measures the weak Brehmsstrahlung that results when electrons are accelerated and deflected from the charged debris object. On top of touchlessly measuring the other space objects potential, both methods have can also provide some basic material property information. The AVS lab ECLIP chamber is being equipped with a range of charging devices such as an electron gun, an ion emission device, a photo-electron stimulator, as well as external power supplies. The resulting research has applications to charged active debris removal, but also for general rendezvous and docking mission scenarios. 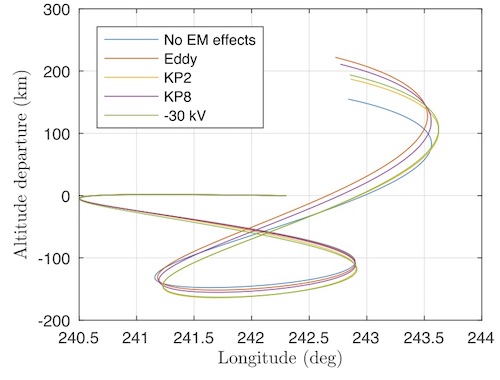 A particularly challenging category of GEO debris objects are the HAMR or High-Area-to-Mass-Ratio objects. It is postulated that these are torn off Mylar thermal blanket segments as they are very strongly perturbed by solar radiation pressure. In prior work it was also postulated that charging could impact these HAMR object. The AVS lab performed a detailed study of how charging could result in electrostatic forces and torques on these thin membranes. While charging does impact the orbital motion, this is done primarily through electrostatic torque that change the orientation. The E-force is far smaller than other perturbation forces. As the orientation changes, even slightly, then the solar radiation pressure will be different and the membrane debris will have a different perturbation. As a result, this work illustrates how strongly unstable the perturbed HAMR motion is, and why these are so difficult to track. 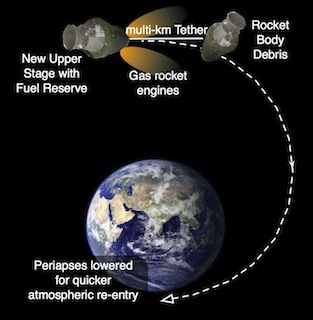 The low Earth orbit debris environment continues to be a concern for the space community. While debris mitigation is an important component of reducing on-orbit clutter, active debris removal methods are likely to be necessary in the future. The AVS Lab is studying a debris removal concept which aims to deorbit existing defunct large rocket bodies by considering small modifications to existing launch vehicles. The following concept is being proposed by Dr. V. Trushlyakov of Omsk State Technical University. Post-mission fuel reserves from the second stage of a heavy launch vehicle are used to rendezvous with an existing rocket body debris object. Upon tethering to this debris, a Delta-v maneuver is performed with the remaining fuel reserves to lower both objects' periapses. Specifically, in current study, a Soyuz-like rocket-body is considered the thrusting tug craft, while a Cosmos-3M rocket-body is considered the debris object. To deorbit a Cosmos-3M in 25 years from an 800 km orbit only requires a combined Delta-v of 120 m/s. This is within the fuel reserve budget of the Soyuz upper stage, illustrating the feasibility of this approach. In order to avoid collision between the two craft, deep-space dynamics reveal that the thrust can be throttled in synchronization with the relative motion so that, at the end of a burn, zero relative velocity between the two craft is achieved. The on-orbit dynamics reveal that the orbital motion helps keep both craft separated. Our research group is collaborating with Omsk State University by investigating the complex relative dynamics once the two large, rigid bodies are tethered to each other, and the deorbiting burns are engaged. Studying the dynamics, and the thruster control solutions, methods are being investigated to ensure the robustness of this ADR system.