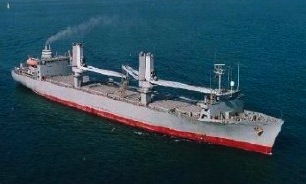 In general, the payload acts as a spherical pendulum whose attachment point is maneuvered using the crane's degrees-of-freedom. As the operator commands the various axes of the crane to affect rigid body payload translation and rotation, the payload's swing degrees-of-freedom can be excited. An experienced operator can often generate the correct crane inputs such that the payload is swing-free at the end of the maneuver. Training an operator to use a crane requires significant resources and poses potential hazards. 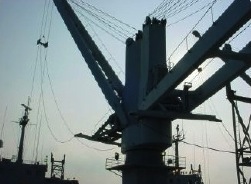 This payload pendulation problem is greatly enhanced if the crane is mounted to a moving vessel. The ship motion itself can excite very large payload pendulation and force the cargo transfer operation to be suspended until the seas are calmer again. The Navy has a series of T-ACS ships (auxiliary crane ships) which have large cranes mounted to their decks. These ships incorporate a unique capability stemming from the need to be able to offload containers and other heavy equipment from non-self-sustaining container-ships in areas where port facilities are damaged, inadequate or non-existent. They are designed to be anchored offshore and assist in off-loading large container ships by transferring the cargo to smaller lighter vessels. 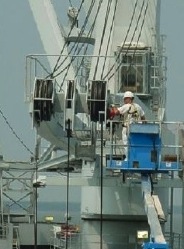 Over the last several years the Intelligent Systems and Robotics Center at Sandia National Labs has been working with the Naval Surface Warfare Center in Carderock to develop a pendulation control system (PCS). The control solution avoids ship or user input caused payload pendulation, while stabilizing any transient swings caused by cargo lift-off transients etc. To achieve this, an existing ship mounted crane is upgraded with a digital control system and a variety of sensors. The first generation solution was installed and tested on the T-ACS 5 Flickertail State vessel in Oct. 2002. The Sandia supplied solution showed a dramatic increase in capability to precisely transfer cargo compared to conventional systems. The system is currently undergoing further testing. Also, continued research is being performed in refining the hydraulic drive system modeling process, as well as refining the control solution to potentially allow the use of cheaper, less accurate sensors.